Lochnagar Crater, 1916...the first day of the Battle of the Somme! 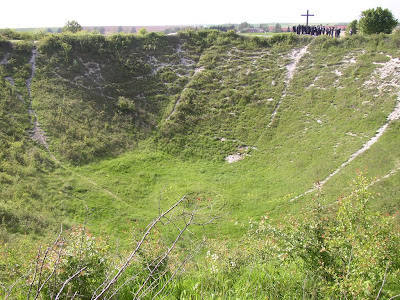 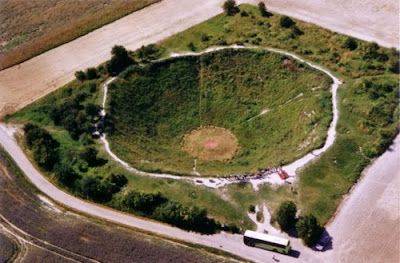 Along the D20 in La Boisselle a sign points to the right to 'La Grande Mine'. High on a hill outside the village is 'La Grande Mine', a great crater known to the British as the 'Lochnagar Crater', caused by the detonation of a British mine at 7.28 am on 1 July 1916, just before the opening assaults of the Battle of the Somme. The mine contained 66,000lbs of ammonal in two charges 55 feet below the surface. The mine was blown at 7.28 on the morning of 1 July, and was the largest of the mines exploded: the explosions constituted what was then the loudest man-made sound in history, and could be heard in London. The mine created a crater 90 yards across and 70 feet deep, with a lip 15 feet high. The sector was attacked by the 34th Division, a New Army Division consisting of Tyneside Irish and Tyneside Scottish battalions.

The whole earth heaved and flashed, a tremendous and magnificent column rose up into the air. There was an ear--splitting roar, drowning all the guns, flinging the machine sideways in the repercussing air. The earth column rose higher and higher to almost 4,000 feet [1,220 metres]. There it hung, or seemed to hang, for a moment in the air ... then fell away in a widening cone of dust and debris.